This article will describe in detail the Lite coin cryptocurrencies. You will learn a lot of interesting things, and also remember a lot that you forgot.

Cryptocurrency Litecoin is an alternative payment unit created according to the principles of cryptography and is a fork of Bitcoin. It has the properties of a typical digital asset:

Charlie Lee created Litecoin while working at Google. At Google, Charlie has worked on several well-known projects such as Google Play, Chrome OS, and YouTube. Lee left Google in 2013 to pursue Coinbase full-time. Coinbase is now one of the largest cryptocurrency exchanges in the world. However, Charlie has already left her and devoted himself entirely to Litecoin.

Most expensive assets are usually divided into fractional parts. It get their own name for convenience – the principle is the same as that of traditional monetary units. So, not every investor can and wants to acquire a whole btc and spend $ 45,000. Rather, he will spend the constituent parts of this asset. Litoshi is the smallest part of one Litecoin coin. Each Litecoin is measured in litoshi. The appearance of the Litoshi unit is due to the growth of the cryptocurrency rate. One Litecoin is divisible by 100 million units, and the smallest fraction is 0, 00000001 LTC. It is worth highlighting the intermediate units of measurement – microlite, millilit, litsent and others.

Let’s take a closer look at how many Litoshi are in Lite coin:

Each can always find the current rate of this coin on my blog at the bottom of each page. If you want to see the dynamics of this coin and find out other analytics, you can use this site.

You can invest Lite coin in many ways. The first method: buying a coin on the exchange with further resale and getting a profit. Second way is the investment platforms. These are sites that offer profit after a certain period of time.

You can find the current platforms for earning lite coins here.

There are four ways to store Litecoin. The range of wallets is as follows:

There are a large number of cryptocurrency wallets. The best of them are:

In my opinion, this coin has good growth prospects. At the moment it is in my investment portfolio. I hope for its further growth and increase in capitalization.

The main similarities between Litecoin and Bitcoin

All cryptocurrencies are similar in technical parameters, and at the same time have a number of distinctive features. This also applies to the comparative characteristics of BTC and LTC. Let’s look at the similarities:

Litecoin has its own advantages over its “big brother”:

And about the disadvantages:

Mining – the process of forming a new block in the blockchain system. Mining is essential for the cryptocurrency architecture to continue to exist.

In the process of mining cryptocurrency, the miner directs the computing power of his equipment to select the correct hash function for the next block. After which he receives a monetary reward, which is distributed in a given amount.

It is noteworthy that each crypto-system has its own algorithm that sets the tone for all subsequent emission. So, the Litecoin algorithm is called Scrypt. 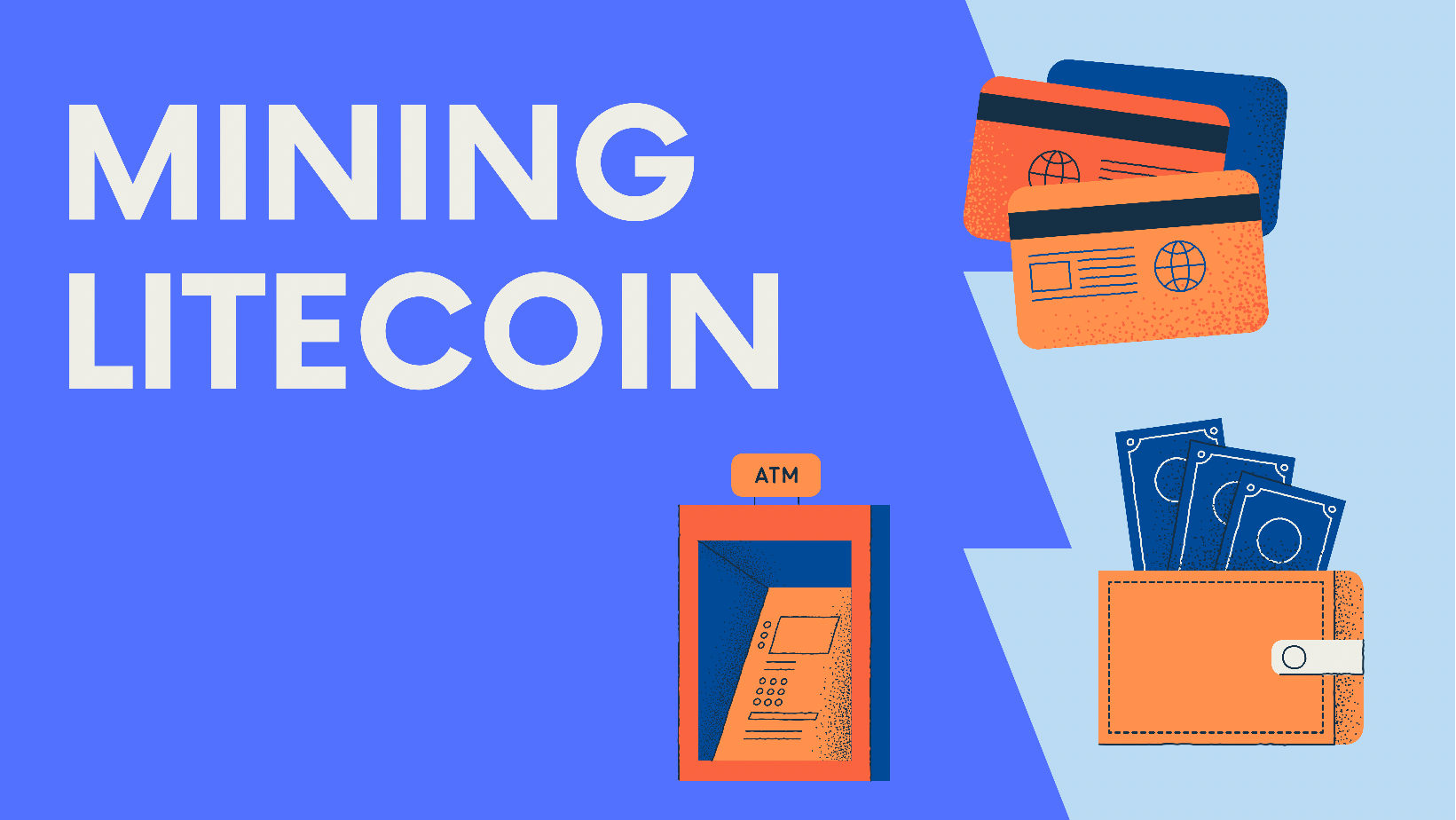 To start with, you can collect LTC using processors – CPU and GPU. A budget option and a good alternative – in the same Bitcoin, such equipment is already considered insufficiently powerful and useless.

Mining is not much different from working with other cryptocurrencies. You can do it yourself, but many miners are already using pools.

A pool is a server that combines the computing power of the equipment of several participants for efficient mining of coins. After the hash function is selected and the block is solved, the same server distributes the reward among the owners, taking into account the commission fee.

In order to start receiving Litecoin, you need to create a wallet for storing coins: it is at this email address that the mined will get to you. You can’t get started without a wallet.

It also doesn’t hurt to choose a way of working:

A typical GPU farm for mining Litecoin or other cryptocurrency includes:

It is important to provide additional cooling. Video cards will work very actively, at their maximum capabilities, so their standard coolers will not cope.

GPU mining is slowly becoming a thing of the past in Litekin mining, and most users are confident that, despite the strong resistance of the Scrypt algorithm, ASICs will soon become the only option.

An example of an ASIC for Litecoin is Antminer L3 + from Bitmain. Its hash rate (hash rate) is 504 mh / s, power consumption is 800 watts. Setting up an ASIC is much easier than setting up a GPU farm: just plug it into a power supply and a computer. In terms of compactness, it also surpasses the farm.

In 2021, the best video cards for mining Litecoin and other cryptocurrencies are:

The disadvantage of video cards is that they show much less efficiency than ASICs. To get a normal hash rate, you will need to purchase a large number of devices of the highest power. Economically it will be less profitable than buying an ASIC.

But there are also pluses. Video cards are less noisy, so they can be kept in the apartment. You can switch between different mining algorithms if it suddenly becomes unprofitable to mine Litecoin. And in case of complete uselessness, the cards can be easily sold or used for other purposes.

Mining on your own hardware

A lot has been said in this article about mining on your own equipment. First of all, for this method you will have to spend a lot: an ASIC miner costs from $ 800-1000, an Nvidia and AMD video card. The cost depends on the model – about half the price. But it will not be enough. You also need to choose the right software from the list of mining programs.

Problems can arise with the placement of equipment and payment for maintenance. It produces a lot of heat and noise, and also consumes a large amount of electricity. And it takes up a lot of space.

But you do not depend on anyone and do not risk anything, and the gadget that has become unnecessary can subsequently be sold at the original price. The demand for equipment is so great that there is a shortage in the market.

Cloud mining is considered to be very dangerous. Its main principle is this: you find a service that provides this service. Next, choose the algorithm and the amount of power you need. Then you pay for it and get it on lease for a certain period – most often for at least 1 month.

At the same time, the client does not need to do anything: only withdraw the profit. On some cloud mining services, pools need to be selected and configured manually. But it’s not difficult. The main risk associated with cloud mining is that these services are difficult to verify. Perhaps they have no office, no mining rigs, and all activities are a fragile pyramid. For this reason, inexperienced investors are advised to be careful.

Faucets are sites that pay money for performing certain actions: subscribing to communities on social networks, watching commercials, entering captcha, and the like.

It makes no sense to count on big profits in this area. In addition, there is a minimum withdrawal threshold. In order to get $ 10, you need to watch ads around the clock.

Litecoin faucets are unpopular and rare. If you want to buy Litecoin, be sure to read how and where you can buy litecoin profitably.

The main differences between mining Litecoin and Bitcoin

Litecoin was created as a fork of Bitcoin, but the process of working with blocks of these currencies is different for a number of reasons.

This coin was created a long time ago. It was much earlier than the more popular Ethereum. But it has not reached a significant price. Of course, this does not mean that he has no prospects.

Sensitive to changes in the market, LTC is going through a small crisis with a decrease in price and volume of capitalization. After this period is over, the situation promises to return to normal.

Do not expect the price of the coin to reach the same scale as the Bitcoin. But positive user reviews and a good place in the ratings will allow her to stay on the middle line for a long time and be a convenient tool for investment.

Litecoin made its brightest jump after being listed on the Coinbase exchange, when the value of the coin exceeded investors’ expectations. The connection with Bitcoin has hindered further development. The collapse of “digital gold” was reflected in the Litecoin rate. Fast transactions and the implementation of the SegWit protocol give hope for the further development of Litecoin.

It is not worth waiting for Litecoin to approach its “ancestor”, but the platform is able to compete with Ethereum. Now the cost of ether is stable. The growth in the value of the currency is directly related to the Bitcoin exchange rate. If it grows, Litecoin will also grow.

There are no unambiguous predictions about the future development of Litecoin. Today LTC continues its downward trend and does not give any hints of a reversal. In conclusion, I can say that the volatility of the LTC rate is a good basis for trading, but investing in Litecoin for the long term is still too risky.