There are many different trading strategies and analytical tools to support them. However, all of these approaches are based on human psychology. How people act in a given situation in the cryptocurrency market. Bitcoin domination and alt season is a psychological expression that manifests itself as a market trend.

Since the release of the first cryptocurrency and over the following years, Bitcoin has remained the absolute dominant in the market. This was due to the fact that there were not enough other currencies that could compete with him. However, as other cryptoassets emerged and developed, its dominance began to decline.

What is Alt Season?

The periods when the dominance of bitcoin falls and other cryptocurrencies gain significant market share are called the altcoin season or alt season. The season starts when 75% of the top 50 altcoins outperform Bitcoin in market capitalization in the last 90 days. In other words, money flows into altcoins faster than bitcoin. At this time, Bitcoin often declines after updating the historical maximum or enters the flat stage.

The beginning of the altseason can be assumed by several signals:

However, it is difficult to predict when the next alt season will be, as the cryptocurrency market is extremely volatile and unpredictable. As practice shows, bright altseasons are quite rare and do not last long. Investors begin to fix profits, thereby increasing the amount of Bitcoin, and altcoins, as a result of a sharp sale, begin to decline. During the altseason, cryptocurrency rates, especially those with small capitalization, can grow tenfold in a short time. It allows some market participants make big profits.

For the first time, Bitcoin’s dominance began to decline in 2017. The reasons for this were the emergence of Ethereum, the spread of ICOs and ERC-20 tokens. There was a large influx of investments in altcoins. As a result, the dominance of Bitcoin fell to a minimum of 35% for the first time. Despite the fact that at the end of the year the price of the first cryptocurrency increased from $ 1,000 to $ 20,000, its dominance remained below 60%. The decline in the dominance of bitcoin caused a significant increase not only in altcoins, but also opened an influx of new users, coverage of cryptocurrencies in the media. Collectively, this has only increased the growth of the entire market.

As a result, at the beginning of 2018, the capitalization of the entire market reached $ 830 billion. 550 billion was in altcoins. The decline in Bitcoin positions at the beginning of 2018 continued up to 32%. Then the market correction began, many altcoins went bankrupt. The dominance returned to the first cryptocurrency and remained with it until 2020. 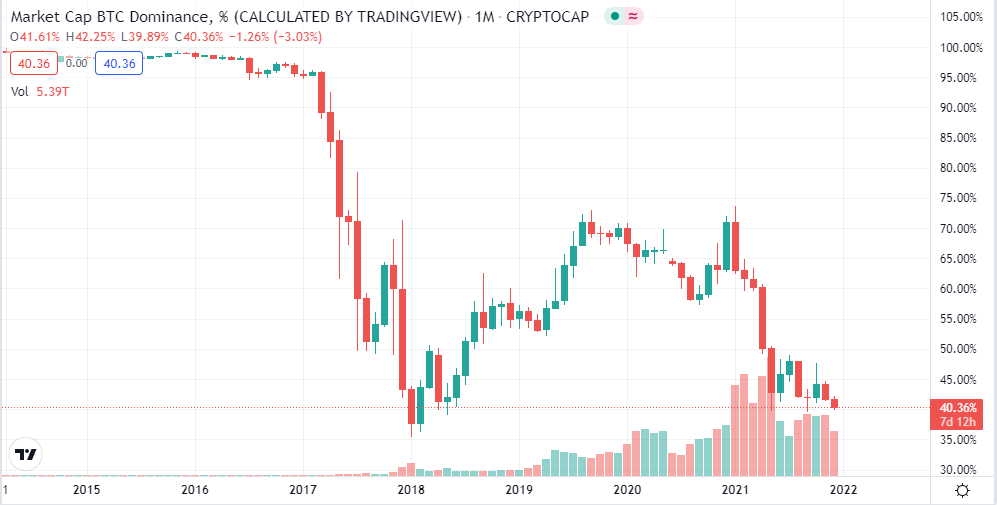 The next major period was the DeFi summer in 2020. The development of decentralized finance, the emergence of innovative projects and ideas again created a stir around altcoins and their dominance began to grow. However, this period also did not last long. It had already died down towards the end of the year. Bitcoin continued to dominate other cryptocurrencies until early 2021.

But since the beginning of 2021, its dominance began to gradually decrease and today it does not rise above 50%.

As history shows, the altseason does not last long and most often begins under the influence of some events. During it, cryptocurrencies show less dependence on Bitcoin, and vice versa. When its dominance grows, altcoins sag in relation to it. However, everything is not so simple. Since Bitcoin is the first, largest and most widely recognized cryptocurrency, the entire market depends on it. If Bitcoin grows, then most of the alts will also show an increase in the ALT / USDT pair. But Bitcoin will stall, or fall by an equivalent percentage of Bitcoin’s growth. Altcoins are starting to be revalued based on the current high value of Bitcoin. It is the impetus for growth. The profit from Bitcoin, along with positive market sentiment, creates an opportune time for investments in other cryptocurrencies. 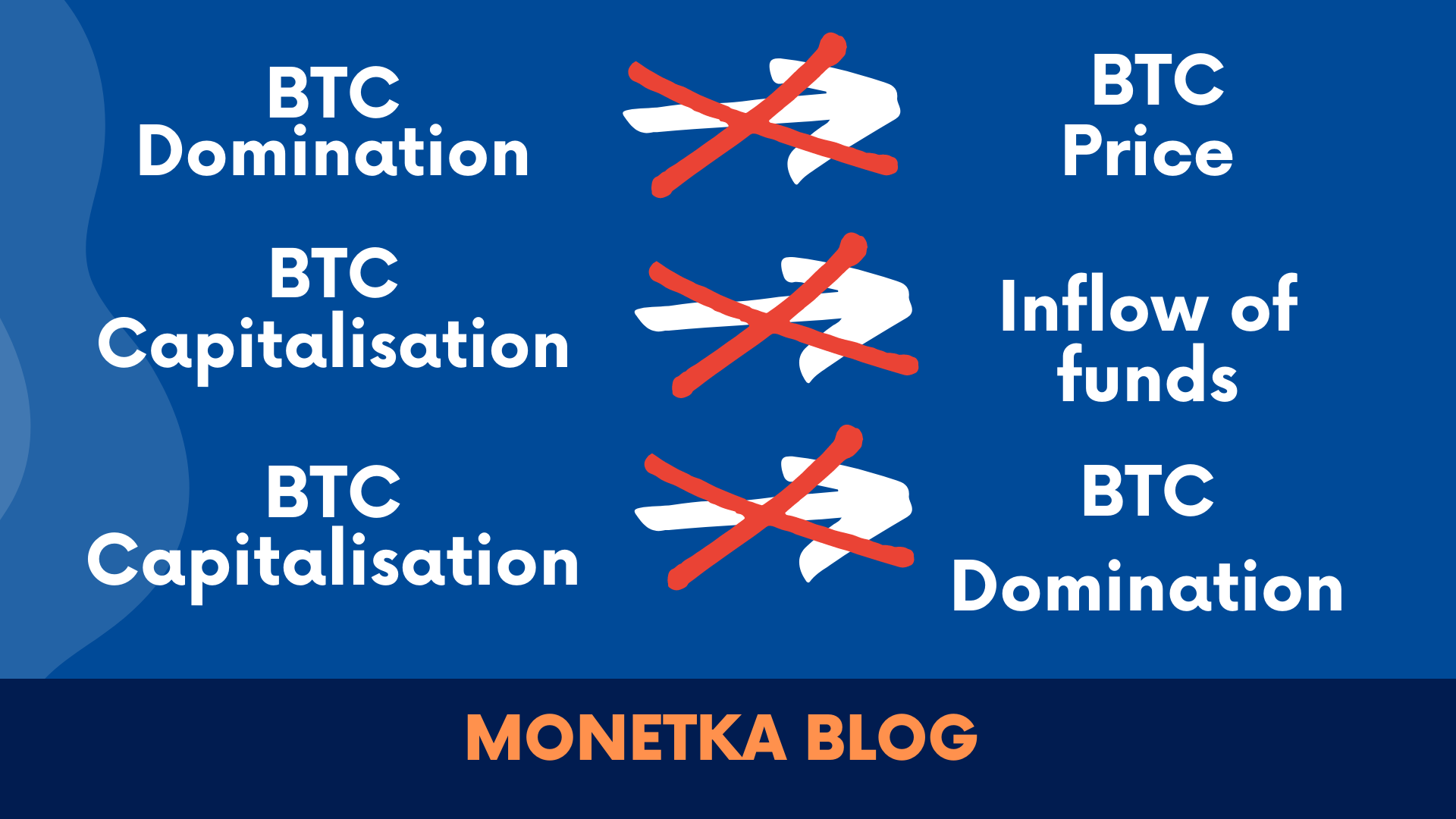 The dominance index is often referred to by traders who, on the basis of it. They make decisions either to take positions in the Bitcoin market or move to the altcoin market. If the index goes down, we can conclude that investors prefer altcoins. This often happens in a growing market. In the opposite case, if altcoins are actively selling, this may indicate the fear of investors. The desire to invest in less risky assets – that is, Bitcoin. However, it is unreasonable to use only Bitcoin’s dominance coefficient, it is necessary to study other market indicators.

While Bitcoin remains the leading cryptocurrency in the world, its dominance in the market has been declining over the past year. The market is becoming more diversified by the creation of more altcoins. Large number of investors are not currently focusing only on it.

In April 2021, the total cryptocurrency market capitalization surpassed the $ 2 trillion mark for the first time. However, Bitcoin’s dominance index was at 54%, the lowest since 2019. Bitcoin’s dominance continued to decline in 2021 amid negative news related to energy use and mining bans (for example, in China). In addition, the growth of the second cryptocurrency Ethereum and the number of projects based on it. The prices of many altcoins have also hit new all-time highs. In the summer, we saw a massive boom and growth in the popularity of NFTs, which also led to an increase in the capitalization of altcoins.

During this year, the level of Bitcoin domination periodically rose to 47%. But it did not stay there for a long time and again fell below 45%, although its price reached new records. The latest such rise came amid news of the start of trading in the first US Bitcoin futures ETF from ProShares. However, after a short time, it fell again to almost 40%. If the current trend continues, Bitcoin’s dominance rate could drop below 40% for the first time in three years.

Bitcoin’s dominance rather reflects market sentiment, so this index (or ratio) can be used by traders and investors to identify market trends. However, in such a complex ecosystem as cryptocurrency markets, this indicator alone cannot be used.

Bitcoin’s dominance is just one of many possible metrics that describe the current market environment. In addition, we can see that altcoins grow, while the dominance of Bitcoin is declining. Perhaps, in the future, the ratio will become less and less. This index may become useless and altcoins will no longer depend so much on the price of bitcoin.